As seen in El Tiempo Latino

(Translated from Spanish to English) Original

Kristina Campbell would never have imagined years ago that she would be a mom, let alone a mom of a Hispanic teenager.

However, working with immigrant families and unaccompanied minors changed this lawyer’s vision, who lives in Prince George’s, Maryland.

“In 2015, I worked in shelters in Texas with mothers and children who were detained. Many of them were teenagers who had crossed the border alone,” Campbell said while noting that this was an experience that sowed in her a desire to adopt a girl.

When she turned 40, she evaluated her life and achievements, setting new expectations for herself. “I had dedicated myself to my profession, and it was fine. I had never thought about being a mother, but I felt that I could do more in life,” she said on Monday, August 23, during a conversation with El Tiempo Latino.

Today, Campbell has an entirely different life with her daughter Flor, a 16-year-old Colombian girl she adopted right before turning 14.

The lawyer, a professor at the University of the District of Columbia (UDC), adopted her daughter through Kidsave, a program that connects orphaned children or children in foster care in other countries with families in the United States.

“Miracles in Summer,” a program of hope

Kidsave has a program called “Summer Miracles,” through which children who need a family between 9 and 15 years old travel to the United States during the summer for three to five weeks to get to know the families that could adopt them.

Since 1999, more than 2,000 minors from five countries, including Colombia, have visited the United States, and more than 80% of them have found their adoptive parents.

Campbell participated in the program in 2018 and met a 13-year-old teenager. However, the adoption process could not be started. “I had had the girl for five weeks, and I was excited about her, but when she returned to Colombia, she was no longer available for adoption,” said Campbell.

Fate wanted them together

After months, Kidsave contacted Campbell again. They told her that there was another girl who was looking for a family. The girl had also come to the United States in 2018. “But she didn’t find a family either. The people who received her could not adopt her,” Campbell said.

“They told me about Flor, and when I read her file, and I knew that she was going to be my daughter. So, without knowing her, I started the adoption papers,” she said.

That same October 2018, Campbell applied to adopt her. The paperwork took two months before she finally received approval.

Finally, on April 1, 2019, the day came for them to see each other in person. “I traveled to Bogotá to pick up who would be my daughter,” she said.

A video shows how nervous Flor was waiting at the wellness center for her future mother. When Flor and Kristiana saw each other, Flor ran to hug Kristina tightly. It was as if she did not want to let go of her, as her eyes filled with tears. Her smile could light up a room.

“Flor is a very special girl, very strong and loving. We get along well, and the house is always happy,” said the Campbell. The young girl is adapting to the new system, as she is learning English and recently just started school in person.

Campbell says the pandemic benefited her and her daughter by giving them more time to get to know each other better.

The lawyer adopted Flor in April 2019. “I asked for six months’ leave to spend time with my daughter,” she said. She returned to work in January and in March the pandemic was declared, thus, closing everything. “So, we were able to spend an entire year together because I work from home,” she said.

Campbell is now part of the Kidsave team and promoted the program at various events during July and August. “The important thing about Kidsave is that it focuses on older children, who have little chance of finding a family. Most people want to adopt young children and it is difficult for teens,” Campbell said.

In fact, Flor spent most of her life in foster care. “She wanted a permanent home,” her mother said.

Kidsave was born at the initiative of Terry Baugh and her business partner, Randi Thompson.

In 1993, Baugh traveled to Russia to adopt a child. She was not prepared for what she saw. The orphanage was a large, cold institution with an insufficient number of caregivers for all the children. Children with shaved heads sat in pens without toys or stimulation. The caregivers meant well, but there were too few for so many children.

For months afterward, Baugh could not get the children’s faces out of her mind and shared her experience with Thompson, who was also a foster mother.

Thompson was working on a project in Kazakhstan, so on her next trip there, she visited an orphanage for older children who were considered “non-adoptable,” and what she saw there seemed even worse. She saw 15-year-old children who were about to leave the orphanage and start living alone on the streets. These were the children the world had truly forgotten, the ones who had no hope of any future. They needed a miracle. So Terry Baugh and Randi Thompson teamed up to make that miracle a reality and founded Kidsave.

In 1999, Kidsave gave 177 older children from orphanages summer vacations in the United States with American families, and 97% were adopted. The program now works in Russia, Colombia, and the US. In addition to Colombian and Russian children, children from Sierra Leone and Ukraine are included.

The program helps change the lives of these children and the parents who adopt them, as it did with Campbell. “Now Flor is my priority and joy,” she smiled. 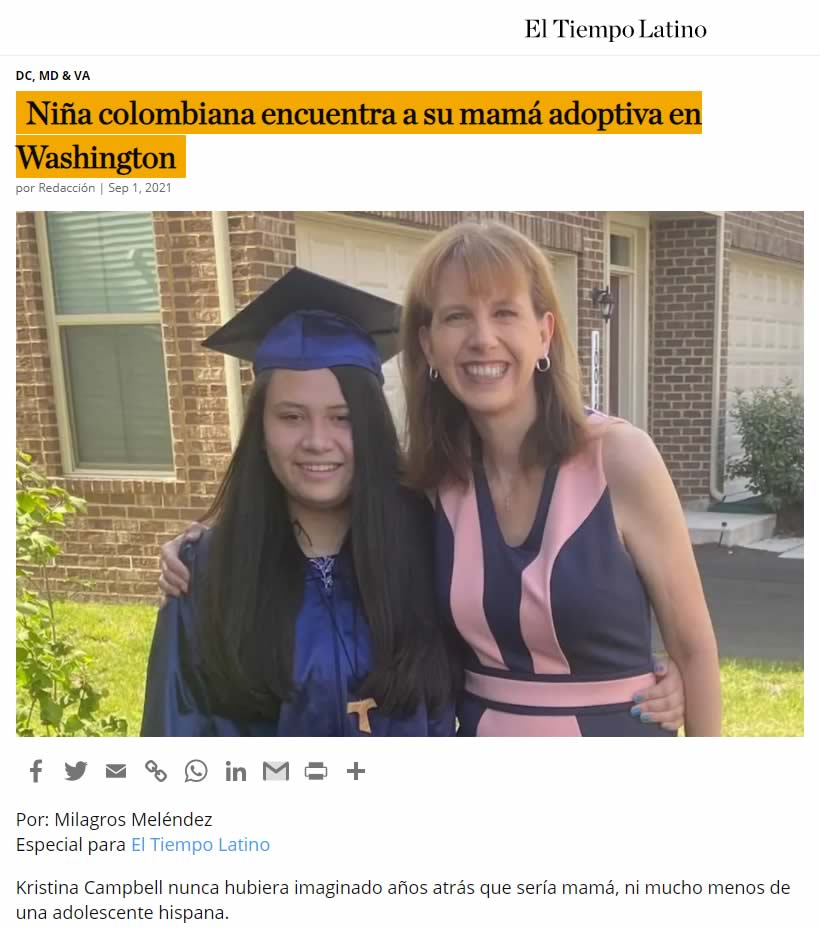