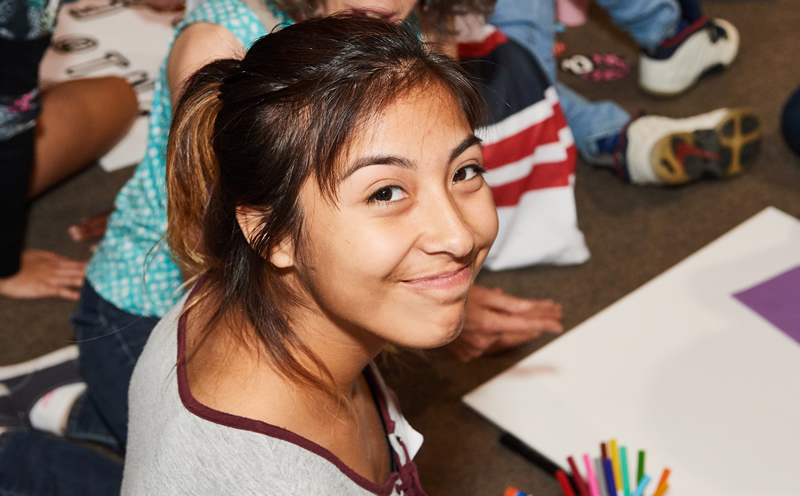 Julie’s journey to a forever family has not been easy. She was 12 years old when she entered the foster care system four years ago. Her biological father had passed away when she was very young, and there was little connection with her biological mother.

Since discovering Kidsave, Julie has been involved with the Weekend Miracles events where she met first met Kelly and Delaney. Julie was the first child Kelly and Delaney met at their first Kidsave event. “She was incredibly brave and had the entire table of adults chatting. She prompted us with questions about our favorite movies, for example. When we left that event, we saw Julie and her sister in the parking lot and we waved again,” Kelly says. “We thought it was a sign – and it surely was.”

Julie was hesitant. “Meeting a new family is kind of weird. You have to see who they are and if you trust them enough,” she says. Julie was nervous and still trying to figure out where to go.  She truly missed her siblings who had been placed in different foster care settings.

Kelly and Delaney spent time with Julie at several Kidsave events and began to really feel a connection.   After driving her to one event, they told Kidsave staff that Julie was the child for them.  They were excited, and totally devastated by what happened next.

Knowing that her siblings were now living with an aunt, Julie made an unanticipated decision — to live with her relatives. “I just didn’t want to be alone,” she says. But after some time, Julie began to realize there was no comfort in living with her aunt, and that her choice to do so had not been a good one for her. Julie reached out to Kelly and Delaney to let them know and expressed her interest in getting to know them further. There was an instant reconnection and a feeling of comfort that she had been missing. She made a leap of faith, moving into Kelly and Delaney’s home, and in just two weeks Julie felt relaxed, happy, and finally welcomed into a healthy environment.

“Kelly was there for me when I needed it,” she says. “I knew I wanted to stay with them. I wanted to be happy. No one at my aunt’s home really supported me as much as Kelly and Delaney do.”

For the first time, Kelly and Delaney are experiencing a role as parents to a teenager. “Julie is making our dreams come true,” Kelly says. “It also really punched me in the heart, when she left her siblings. There was a very good chance that they would never speak to her again. So, to come and live with us was a humungous sacrifice.”

Kelly and Delaney are hoping to make the adoption official very soon and to introduce Julie to her new grandparents. In the meantime, the three continue to get to know one another. Julie copes with her life changes through drawing and running, but she also realizes that talking about her feelings to Kelly and Delaney is a good coping skill as well. Kelly and Delaney are settling into their roles as parents to a teenager.

“Sometimes there are bumps in the road, and it’s good to have those because we learn through them,” Kelly says. “Julie is starting to see the bigger picture of where she can go in life and what she wants to accomplish.”

Julie says, “I now know what being happy feels like.”

Watch Julie’s story in episode 4 of “The Day I Picked My Parents.”

Julie and her parents officially finalized their adoption, virtually, with several family members, friends, supporters and Kidsave staff all watching the beautiful moment unfold. “I’m an attorney. We don’t do anything virtually in my line of work. The fact that they were able to make this happen through the court system virtually was just huge for us,” said Delaney about the adoption. Julie’s name is now legally changed to Julie Slattery-Miller, a combination of both her adoptive parents. Congratulations to this amazing family!