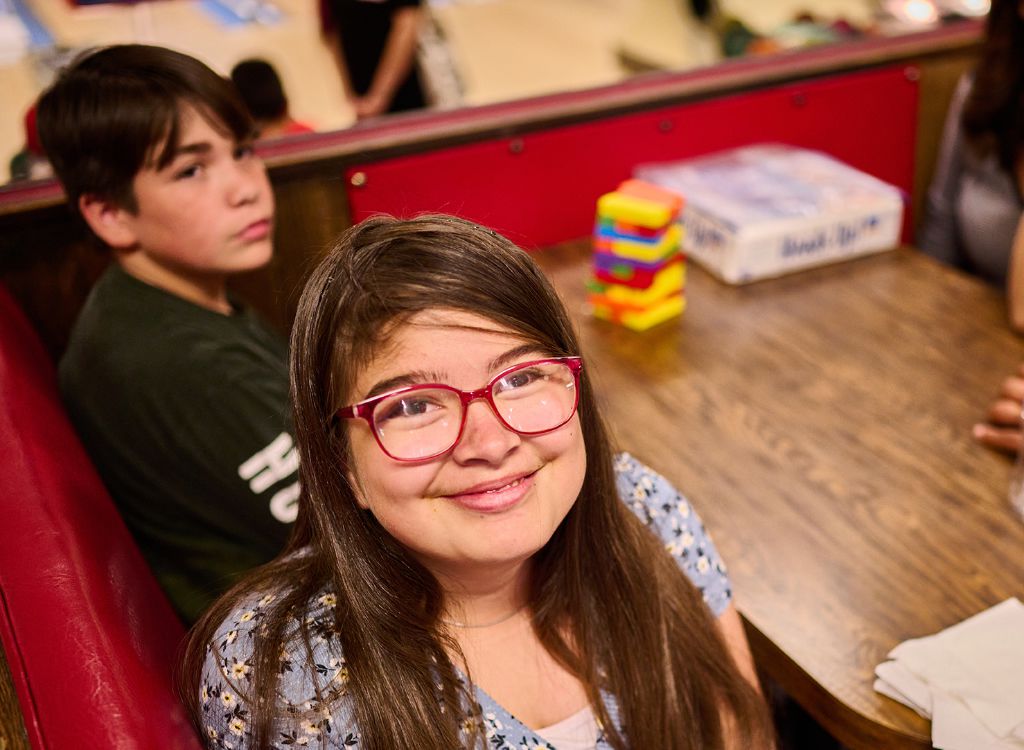 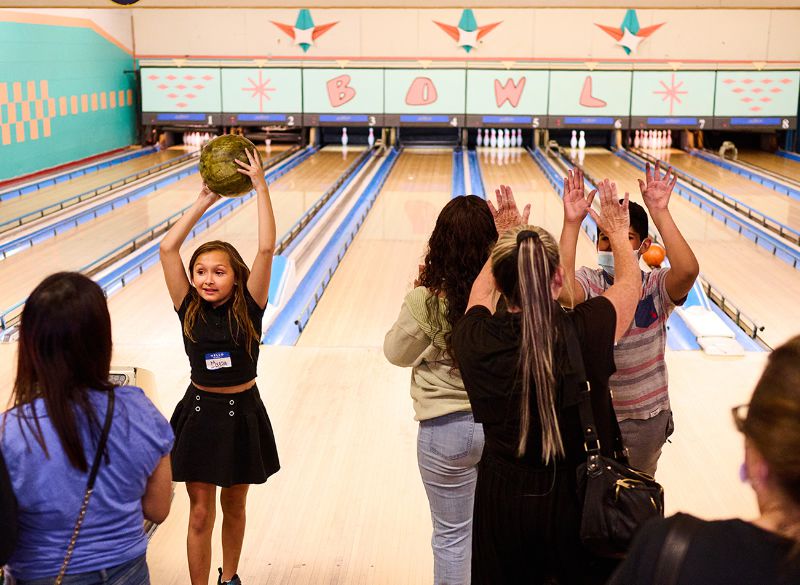 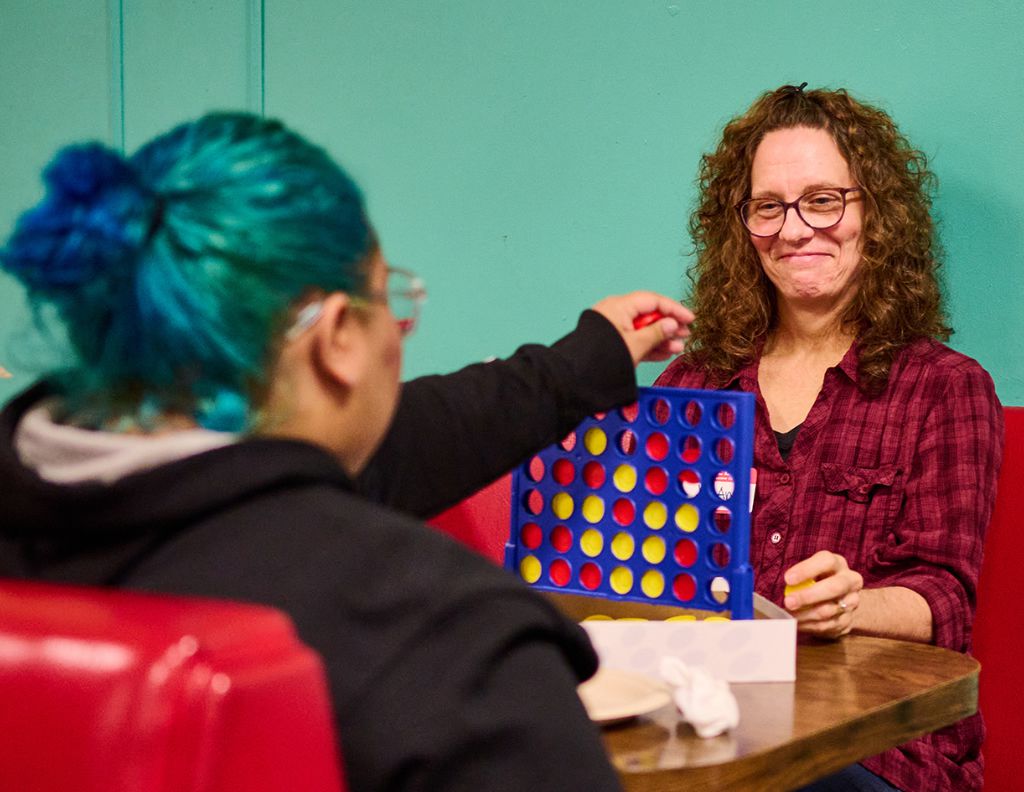 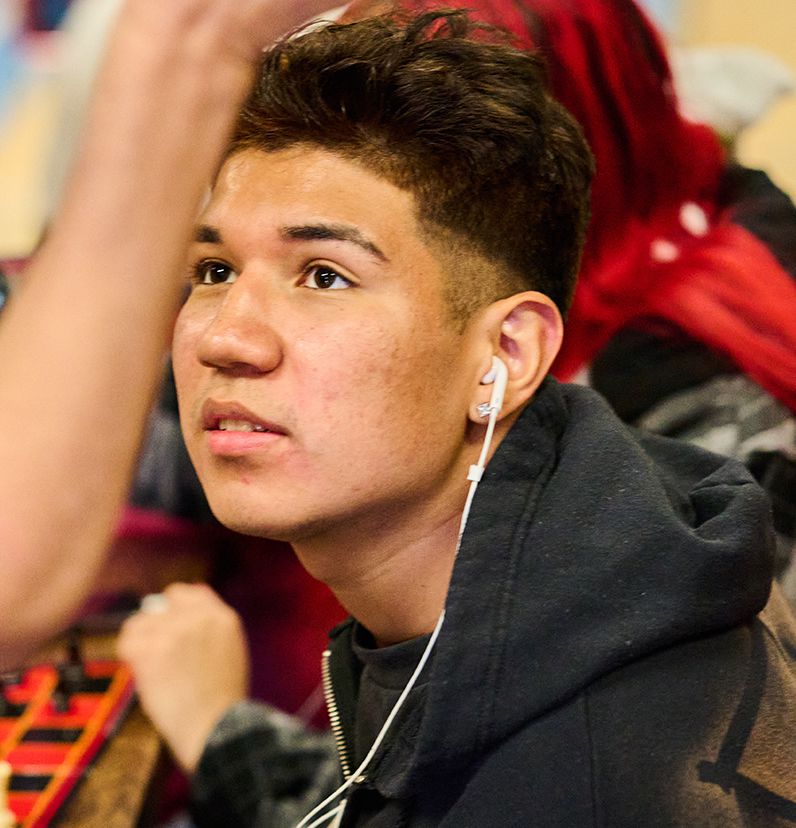 What better way to “strike” up a new connection than with a bowling event? Kidsave makes it our mission to create fun, safe environments each month where older kids in foster care can bond with caring adults.

In Los Angeles, we recently held a Meet The Kids event at the Montrose Bowl. Nestled amongst a bustling weekend farmer’s market volunteers, kids, and families trickled in, the tempting smells of elote corn and churros in the air.

As kids checked in, eager to catch up and joke around with their friends, families new to Weekend Miracles events watched on from a distance, hoping to make good first impressions. After a short orientation, it was time to break into teams and begin the festivities.

With temperatures climbing outside, everyone was relieved to be spending the afternoon in the air-conditioned bowling alley. Signed photos of celebrities lined the walls, and the room was split into an upper and lower deck. Kids and families immediately took off for the lower deck and broke into bowling teams. While the kids and families played, I was able to speak with one of the kids’ social workers.

“Kidsave will give children the opportunity to meet with mentors who can help them find themselves,” says James Myers, “sometimes these children will have hidden talents that people can bring out.” He explains how kids and adults often bond over shared passions. “It could be music, art… sometimes an adult will have those interests, and they grow with each other,” says James. We’ve seen it happen countless times at Kidsave; it’s always heartwarming.

After speaking with James, I joined other Kidsave staff and volunteers working together to set up lunch on the upper deck. The delicacies of the day were pizza and a variety of cakes.

Even while they enjoyed bowling and making new friends, the kids were eager for treats. After an hour, everyone helped themselves to a slice – or slices. If any of the kids or adults were shy initially, they were all comfortable now. Laughter filled the room and gave way to meaningful conversations.

During the lunch break, I had time to speak with – Zoe and Neha, two new volunteers who were excited to be helping connections form. . Though they each had distinct reasons for getting involved, their shared passion is what we look for in anyone we work with.

“I come from India, raised in a slum area,” says Neha, “I don’t have a great relationship with my parents, but I’ve always wanted to adopt.” After doing some online research, Neha found us and was impressed by our Family Visit Model. “With Kidsave, you can be a host first, and I think it’s fantastic.”

Zoe is a Los Angeles university student. “I’m so excited to meet everyone here, it’s my first time in the U.S.A.; I’m in a master’s program.” Zoe is getting her master’s in the STEM field and wanted to do some good. “I think every student, just like me, has a lot of free time,” says Zoe, “so join a nonprofit program!”

We couldn’t agree more – especially when our volunteers are so enthusiastic.

After lunch and dessert, the kids were ready to bowl again. They spent another few hours of competitive fun before the event began winding down. One of our Weekend Miracles kids, Valentine (or “Val,” as she’s affectionately called), spoke with us before leaving.

“Even though I know the struggles of getting adopted at this age… I want to,” says 17-year-old Val, “I’ve never really had a real family.” We want to help her make that dream a reality. Val’s perfect family might be just an event away!

To attend our next open Weekend Miracles event, sign up here. To talk to staff about other private events and hosting a child email Claudia at claudia@kidsave.org.