As seen in Washington Blade

Adopting an older child from overseas — one couple’s story

Jim Walker and Ethan Taylor had talked about adoption but weren’t sure how to go about it. Ethan himself was adopted and the biological father of a 13-year-old daughter (Bella) from a previous relationship.

Then, one evening in 2018, a Rainbow Families Facebook post caught their attention. “It mentioned Kidsave,” Ethan said, “a non-profit organization that brings older Colombian orphans to stay with host families for five weeks to experience life here with an American family. They’re unadoptable in their own country because they are over eight years old.”

Jim and Ethan had been together five-plus years by then and known each other for 18. “We looked at each other and said, ‘Let’s do this!’ Next thing we know, we’re signed up to host Juan Carlos,” reminisced Jim.

After a five-week visit, many families decide to adopt the children. In fact, 80% of the children who participate in Kidsave’s “Summer Miracles” program are eventually adopted, and those who are not, often come back for a second visit and are adopted later.

During those five weeks, Kidsave and the host families help the children meet potential adoptive families. The children may or may not know adoption is a possibility, but host families aren’t allowed to talk openly about it during the visit.

Jim and Ethan plowed through the paperwork at warp speed and were approved to host. They attended orientations and training with other host families. Soon they were at Dulles Airport, wearing their yellow Kidsave T-shirts so the kids could easily identify them.

When Juan Carlos came through the customs doors, “He ran up to us, gave us big hugs, and then presented each of us with a braided bracelet from his home country,” recalled Jim. “Right then and there, we fell in love with him and knew we were going to adopt him.”

Juan Carlos didn’t care that a same-sex couple hosted his visit. “Since he never had a father figure in his life, he was thrilled to have TWO dads — and a sister,” said Ethan. “Juan Carlos just really, really wanted a forever family that would love and protect him. It didn’t matter that we happened to be gay.”

“The most surprising thing was how happy, resilient, and adaptable he was — and continues to be,” said Jim. “He had spent more than half his life in an orphanage but he never complained about his circumstances,” said Jim.

After hosting, the process of adoption includes many additional steps and hurdles, and unexpected things can and do happen so an effort is made not to get the children’s hopes up. After a two-week “quiet” period people can apply to adopt. The interest must be two-way – the children must want to be adopted by that family.

“When we did bring him home for good,” recollected Ethan, “he immediately ran upstairs to his bedroom and pulled out a bag of quarters that he had hidden and declared, ‘I always knew that I would be coming back!’”

“We learned about that we have a lot of love and patience to give to a child. Being a parent, especially to two device-obsessed teenagers, can be stressful on any relationship but we have learned effective communication and the value of doing things with each other that don’t always involve the kids.”

Jim and Ethan were married in 2019, and both Juan Carlos and Isabelle participated in the wedding.

“Kidsave is very welcoming for people of various backgrounds and sexual orientations,” said Ethan. “There is a great and growing community of Kidsave families in the D.C. area, including several same-sex and single-parent families. We have made some wonderful friends though Kidsave. We strongly encourage others to consider hosting through Kidsave’s ‘Summer Miracles’ program!”

Now 16 years old, Juan Carlos is adjusting well to life as an American teenager. “Every night, when I tuck him into bed, the smile on his face says everything. Being his dad,” noted an equally smiley Jim, “is a dream come true.” 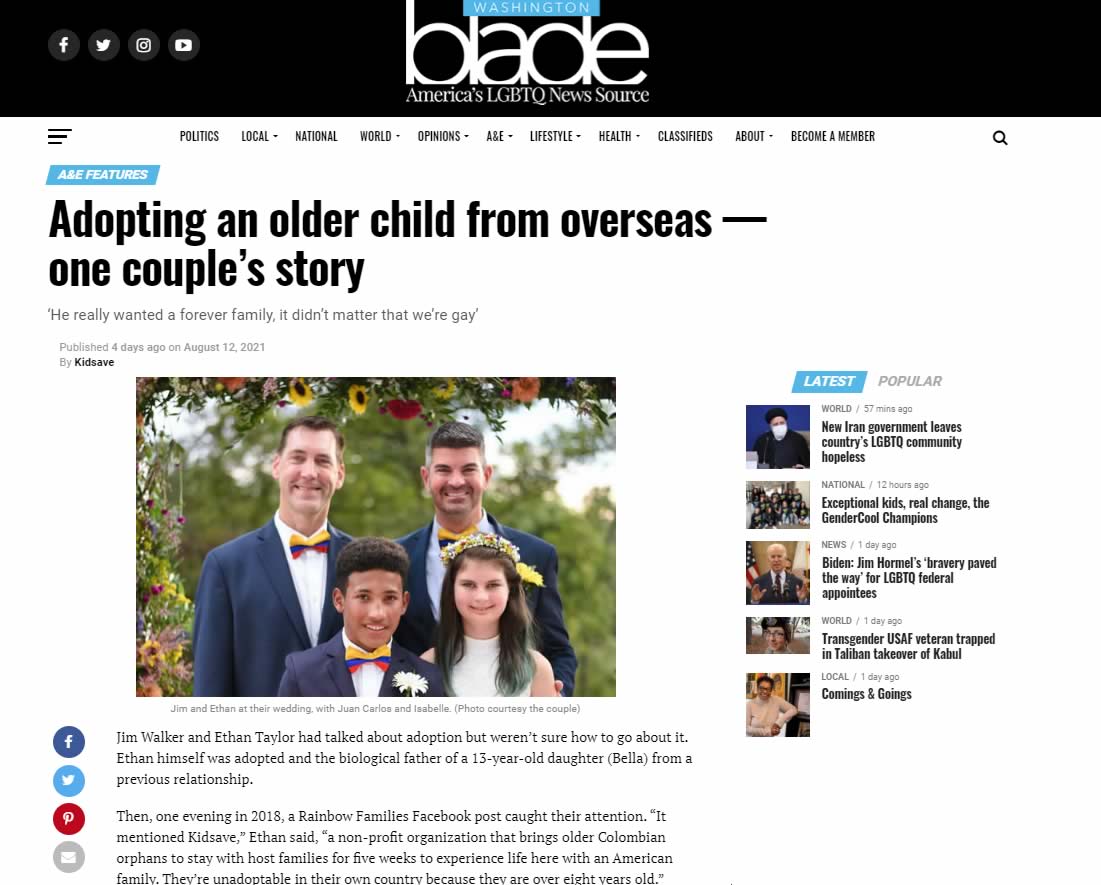