Take a Leap of Faith

Previous Next
Take a Leap of Faith 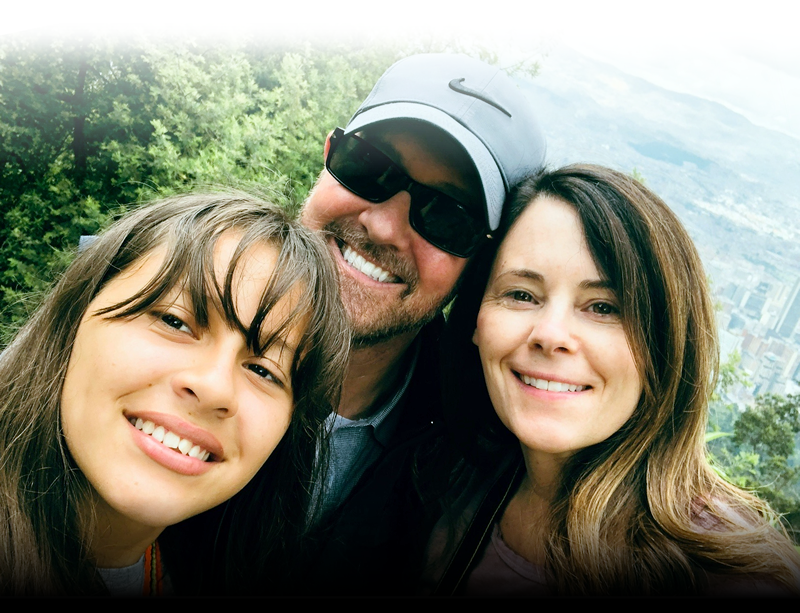 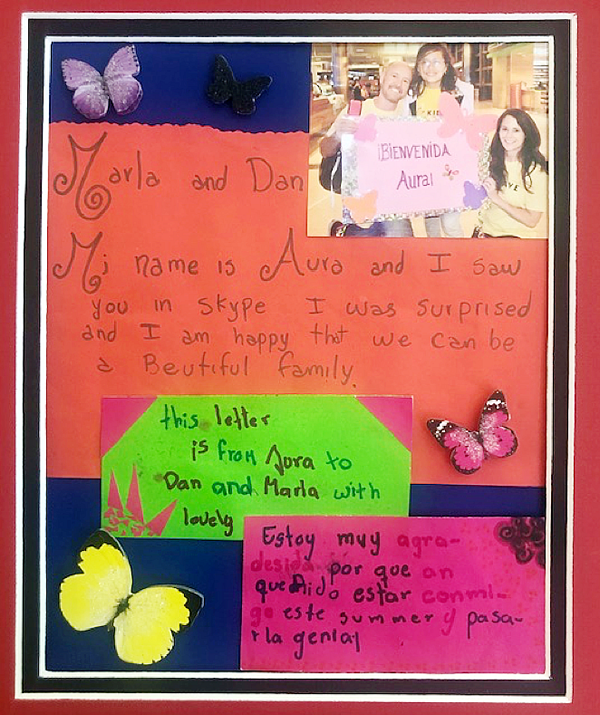 In June 2017 Dan and Marla spent hours making a huge welcome sign adorned with brilliant LED lights and colorful butterflies. They took it to the airport and joined other Summer Miracles host families who were there to greet kids who were traveling from Colombia. “We were very excited to meet Aura and we wanted her to feel welcome,” said Dan. “Aura was the first kid we saw coming through the doors at the airport with a big smile on her face.”

Aura had something she made to give to her host family. “When we met, she gave us the sweetest, most loving card. It was so special to us we framed it,” said Marla. “She immediately felt like part of our family.”

After four wonderful weeks together, Aura returned to Colombia and Dan and Marla made a decision that would change her life forever. They adopted Aura and brought her home in 2018.

Now, having lived together as a family for the past year, they are looking back at what it’s been like since finding their daughter through Kidsave. “The adoption process was very long, but it was worth every minute.  While the Skype calls helped to pass the time, they did not fill the void of not having Aura home with us. We couldn’t wait to start our lives together as a family,” said Marla. From the beginning, the process has felt very natural for the family.

They’ve found that communication has been a key to their success as a family. Aura learned English very rapidly.  Misunderstandings due to the language barrier were a thing of the past in just three months. “Neither Dan nor I speak Spanish, so she had to learn quickly. We know a little Spanish, but she learned so quickly that it wasn’t necessary,” said Marla. However, the family places a strong emphasis on Aura maintaining her bilingual skills; she continues to read and write in Spanish, and speak in both languages with her friends.

Marla and Dan also have a new connection to Colombian culture that they share with Aura, dining together at Colombian restaurants and decorating parts of their home with photos and art from the country. As Marla explained, this has all been part of a smooth transition for their daughter. “Aura has adjusted extremely well. She’s a very happy and outgoing child. Aura enjoys singing with a karaoke machine and acting; she has a great personality.  As time goes on, she seems more and more comfortable with her new life in the United States,” she said.

The family lives an active and healthy lifestyle, starting their mornings together at 5am.  On weekend they often go hiking, or to the beach, while still appreciating home life together watching a movie. Having a child in their lives has brought an unexpected joy to Dan and Marla. “We’ve become really close with the other Summer Miracles families in Orange County who hosted and adopted.”

Vacation time has been a chance for Aura to see more of the United States, with trips to Big Bear, Joshua Tree as well as time at Six Flags and Disney World. Looking back Marla remembers some of Aura’s fondest moments. “She enjoyed seeing snow for the first time. She really enjoys Michigan and seeing our extended family there. We have a family cottage with a small lake where everyone spends time during the summer,” said Marla.

“Before it was just Dan and me, the house was quiet. Aura loves to sing and laugh. She’s brought so much love, happiness and laughter into our home. She’s such a great kid with a happy outlook.” Aura is thriving, making new friends, trying new things and eager to start high school next year. And for Dan and Marla, the Kidsave experience has been truly life-changing. When they signed up for Summer Miracles they planned to provide a child with an amazing vacation and stay open about the future. But once they got to know Aura, all became clear. “It has been the best experience of our lives,” Marla said.

“Every child deserves to grow up with a loving family, regardless of age. Be open, take a leap of faith. It might change your life forever!”