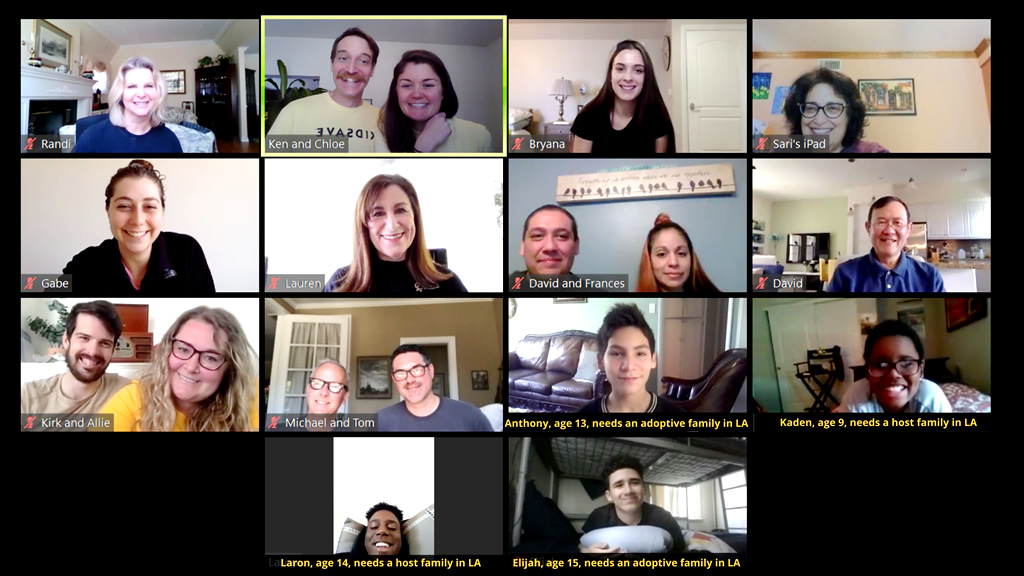 On Saturday, April 11th, Kidsave hosted our second virtual trivia event via Zoom-video conferencing! The purpose of these events is to advocate for the kids participating and helping them make lasting connections with adults, whether they are looking forhost mentors or adoptive families.

This week we had four kids and four families participate. The kids were: Laron, age 14, Kaden, age 9, Anthony, age 13, and Elijah, age 15. The families were Allie and Kirk, David Teh, Mike and Tom, and David and Frances.We started the event asking everyone where they would go if they had a magic carpet that could take them anywhere! Laron expressed that he would want to go to Egypt to see the pyramids; or France, to take his date sightseeing. Anthony stated that he wouldwant to see the Statue of Liberty in New York. Kaden would want to go to Virginia to see his grandmother. Lastly, Elijah was adamant about getting to Pittsburg, because he is a HUGE Steelers fan.

The families shared their dreams of travel, with many of the families agreeing on Japan being a great destination. The beaches of Hawaii, and Ireland, were two other prime destinations.As expected, the event started with both the kids and the families feeling a bit shy. But it didn’t take long for everyone to warm up.

Soon after Elijah brought up the Pittsburg Steelers, other families followed suit in expressing their fandom. Before we knew it, several of the icons on the zoom webinar were flashing Steelers swag like blankets, t-shirts, and towels.

We were so happy to see how the smaller Zoom events help these individuals shine more brightly. Especially those who tend to be more reserved at our typical, in-person, Kidsave events.

After finishing the first round of trivia the kids and families felt like the questions were too easy! They were getting all the answers right. But round two proved to be a bit more of a challenge, with some teams having to take wild guesses hoping to land on the right answer. The kids got so excited shouting the right answer; so much, that we had to remind them to give other people a chance to say their answers. It was heartwarming to see them get so animated at the chance to announce what answer their team had come up with! We finished the third round and tallied up the answers for each team. It was a competitive game of trivia and all teams came in close to one another!

Before moving on to the evaluation forms, we said our goodbyes and finished the event with a video clip of a Hail Mary run from a legendary Steelers game. After the families logged off and Kidsave staff completed the forms with the kids, we were able to give siblings, Laron and Kadeb who had participated in the event the chance to talk to one another in a private zoom ‘room.’

It was special that we were able to give them this opportunity to talk to one another since they have been apart during the quarantine and had not been able to talk until this moment. We look forward to hosting more of these events and having more special moments like these!